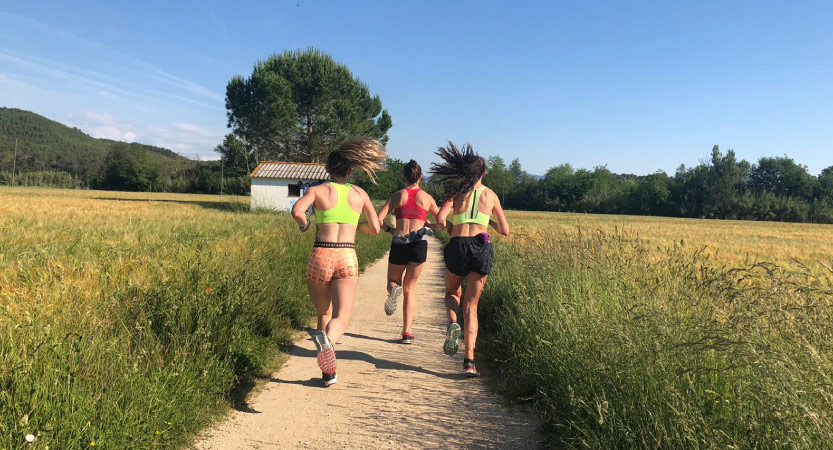 Banyoles is about a 30minute drive from Girona Airport, which is well connected by budget airlines. Girona Airport is quite small and this makes it super easy to collect your bag and straight to the car hire desk. I went with the firm FireFly and ended up with a cute new Fiat 500. One word of advise, save adding any fully comp insurance if going through a third party broker as FireFly will offer their own insurance at the desk which saves submitting claims if anything does happen.

We stayed in the center of Banyoles old town in a cute flat, which worked out about 70 euros each for 6 nights for our group of 5 people.

There was a great choice of routes to run around the lake. We added on a few miles onto the 4 mile flat lake by exploring some hilly trails. If you were training for an endurance event it looked like some of these trails also went up into the small hills. None of our runs were over 10 miles so we kept in and around the lake. We also found a short incline which was perfect doing a few hill sprints.

After each of our sessions there was an area where the public could swim in the lake. Jumping in the lake after a hot sweaty session was glorious.

It was a hot week in Spain the week we visited, with temperatures reaching 30 degrees most days. This meant that we got up and ran in the mornings before it got too hot. If you are used to running in the heat then you would probably be OK. The bonus for getting the run out early on in the day meant an early breakfast and coffee at one of the many bakery’s in the village. You must try the donuts looking Banyoles specialty, they’re delicious!!

As discussed above there are a number of small bakery’s in Banyoles, which are all of really high standard and super cheap. We ate in a couple of nights which helped keep costs down, and who doesn’t love exploring fresh fruit and vegetables to make into a meal.

There were only a few choices to eat out in Banyoles if you’re not a fan of pizza or pasta. There was a Michelin star restaurant, which none of us girls had the budget, or a really cute trendy tapas bar near the lake which served brunch right through to tapas. There was also a lovely little bar on the lake for a mid afternoon beer and tapas called Banys Vells. It also looked like a lovely spot to eat in the evening… that’s one for next time.

Day out to Girona

With Girona being only a 30 minute drive we planned a sight seeing and ice cream eating trip. With a hard 8 miles completed in the morning we needed to take on some more calories. We were definitely in deficit.

Once in Girona we stopped at La Fabrica for Brunch. La Fabrica is a trendy cycle cafe, which definitely appeals to the contingent of professional cyclists who our bases in Girona. The food is healthy and colorful, which was perfect recovery food.

Once we ate brunch we headed towards the Game of Thrones location, and then proceeded to climb the wall of Girona as we called it. The view were beautiful from the top but we were all definitely feeling the 8 miles that we ran in the morning.

It was then time for gelato. We did stop at the Michalin star gelatory but thought that the weird ice lolly’s were over priced. We instead went to a place in the square called La Bombonera that served the best gelato I’ve ever tasted. If you go you must try the pistachio!

How to Start Fitness Blogging in 2020

What is causing your painful Runners Knee NOW?